Growing rapeseed in 2023: the new situation

Growing rapeseed in 2023: the new situation

Today, rapeseed is subject to two major constraints. The summer droughts have a strong impact on the success of the sowing and the surfaces in place have been subjected for several years to a very strong pressure of autumn beetles sometimes resistant to pyrethroid insecticides. The recent withdrawal of the marketing authorization (MA) for phosmet (BORAVI) seems to make the situation more fragile. What is the strategy, what are the solutions?

Early and careful planting of the crop through a judicious choice of tillage methods (early tillage with good straw management, limiting the generation of clods), an early sowing date to increase the probability of an emergence in August, the establishment of an associated cover crop if necessary (especially in small lands), appropriate fertilization at sowing and particular attention to sowing conditions (for example with a single-seed drill) are the fundamentals of a robust rapeseed to face climatic constraints and autumn pests.

One objective: reasoning of the control with effective and available solutions

The phosmet-based insecticide BORAVI has been withdrawn since May 1st and its period of use ends on November 1st 2022. The remaining quantities of the product will be able to control, if necessary, adult flea beetles (foliar attack, in September).
Fortunately, pyrethroids are still an effective solution in some areas (See map - solid orange or red dotted orange). Against adult flea beetles (only for attacks on rapeseed less than 3-4 leaves), they are of a level close to BORAVI (notations at 4 and 8 days after the applications). Against flea beetle larvae, the efficacy of these insecticides is even higher with products based on lambda cyhalothrin in the lead (KARATE, etc,). However, the particular pyrethroids etofenprox (TREBON), tau-fluvalinate (MAVRIK/TALITA), esfenvalerate (MANDARIN) are not recommended. 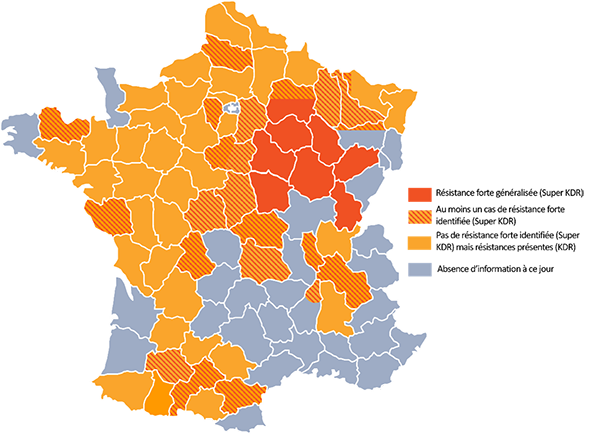 Protection against flea beetle larvae in the absence of strong resistance. 10 trials (5 with winter entry scoring) from 2014 to 2021.

Historically present in Yonne, the high levels of resistance of the flea beetle (super KDR mutation) are now generalized in the departments of Burgundy and Franche Comté, but also in Aube, Marne, and Haute Marne (See map - departments in solid red). Pyrethroids are then ineffective on adults (in September) and larvae (in November). Apart from the use of existing stocks of BORAVI against adult flea beetles, this is a dead end that can only be avoided by prevention: an oilseed rape beyond 3-4 leaves is not sensitive, hence the interest of early sowing to make the crop emerge early.

Favoring a robust rapeseed is not always enough to avoid the nuisance of flea beetle larvae during the winter and insecticide control may be unavoidable. It is to avoid such a dead end that the oilseed sector has mobilized. On February 28, Terres Inovia and Terres Univia submitted an application for a 120-day derogation (Article 53 of REG 1107/2009) for a cyantraniliprole-based insecticide. This solution, developed by Syngenta, has been evaluated by Terres Inovia for several years on flea beetle larvae with a level of effectiveness equivalent to BORAVI. In the medium term, it will be the subject of a marketing authorization.

On the whole territory, the monitoring set up by Terres Inovia shows that this strong resistance to pyrethroids is progressing and the first cases have been identified in about twenty other departments (Grand-East, Ile de France, Centre-West, Auvergne Rhône Alpes) which, until now, supported the use of BORAVI on the whole territory in order to limit this evolution (alternation of action modes). It will be necessary, in the long term, to come back to this type of management, but not using pyrethroids when the number of larvae is lower than the thresholds, is part of the fundamental actions for managing the risk of resistance, in the same way as the alternation. For this purpose, Terres Inovia has developed and made freely available on its website 3 decision support tools on adult flea beetles and larvae and terminal bud weevil. These tools take into account the state of the rapeseed, i.e. the agronomic risk (biomass, vigor and growth) or its ability to tolerate more or less a level of larvae (berlèse method).

Finally, the terminal bud weevil is less affected by pyrethroid resistance. The KDR mutations identified and installed (former Centre region, Bourgogne-Franche Comté and Champagne-Ardennes) confer only a low level of resistance so that in the current situation, the control of this pest (intervention at the end of October, beginning of November) is not questioned whatever the production region (following figure). But here again, an intervention with a pyrethroid contributes to the extension of resistance, on weevils as well as on flea beetles (first larvae), hence the interest to evaluate the interest of the treatment.

The levers that can be mobilized on rapeseed must allow the crop to succeed as we have been able to do until now. This is the purpose of our communication, which will be spread out over several themes up to sowing.

This objective mobilizes the whole sector but also the Ministry of Agriculture and Food in a plan to get out of phosmet. This allows to amplify the research and development actions in which are also mobilized the INRAE, the actors of the private research, companies of the protection of plants and seed producers and of course territorial partners and farmers.

Our axes concern epidemiological surveillance, network monitoring (pest pressure, interaction between agronomic levers and harmfulness according to the status of the plant) and a better knowledge of pests, especially the terminal bud weevil (biology, harmfulness, etc.). They also concern the consulting phase with modeling. Our work on pest control is continuing on insecticides (positioning of solutions, strategies) as well as on biocontrol, on service plants. The evaluation of varietal behavior initiated 2 years ago will be expanded because it is one of the levers of control as is also fertilization.
The concept of "robust rapeseed" (agronomic levers) remains a pivotal factor for the success of rapeseed and this is why its deployment (communication, platforms) is a major part of this plan.

The phosmet phase-out plan and the dedicated financial envelope, i.e. 2.5 million euros (announced by the Minister of Agriculture on December 24, 2021) are also an opportunity to initiate new projects in biocontrol as well as in genetics (understanding varietal behavior, new traits).